AbleGroup’s Whistleblowing Policy is to enable genuine and legitimate concerns to be raised by employees, directors and others. The policy provides an opportunity for those concerns reported by Directors, employees and others to be investigated and for appropriate action to be taken to ensure that the matter is resolved effectively and within the company wherever possible.

The following shall constitute “Reportable Misconduct” under this Whistleblowing Policy;

The Whistleblower should initially communicate a Reportable Misconduct to the Chairman of Audit Committee.

AbleGroup also has provided various avenues which employees, vendors or contractors are encouraged to use to report allegations of wrongdoing or unethical business behaviour such as follows:

The Whistleblower should, at a minimum, be required to provide in the complaint or report, whether in writing or telephone, information regarding the type of activity or conduct constitutes the Reportable Misconduct, identify the person(s) suspected as being involved, when it occurred and who was affected. The information should be first-hand knowledge of the facts disclosed in the Report.

In the event there is insufficient evidence to support their allegation, the Whistleblower should not be discouraged from making a Report.

Making a complaint under the Whistleblowing Policy does not shield the person from the consequences of being involved in any improper conduct or unlawful activity alleged in a complaint under the Policy. However, in some limited circumstances, a full and frank admission may be a mitigating consideration in respect of disciplinary or other action.

Employee and industrial relations related issues and human resources related issues are excluded from the operation of this Policy because there are other established mechanisms to raise such complaints.

However, whistleblowers making a Report in bad faith or based on unfounded allegations or containing trivial, malicious, slanderous or frivolous claims may be subject to disciplinary and/or legal actions by the Company. 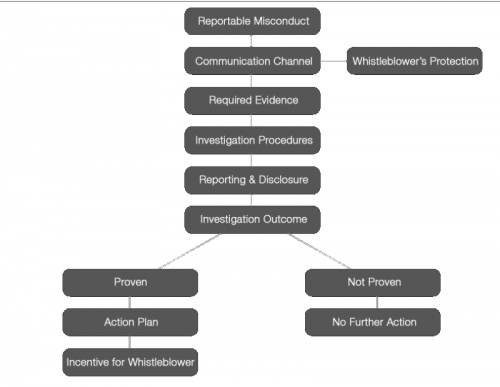